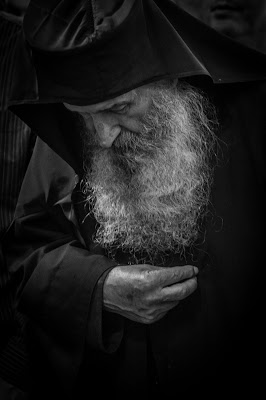 How happy we are to witness that! But very often unfortunately we would see something different. Some believers who have been attending church services for years would make the sign of cross utterly incorrectly. One would wave his hand around as if he is driving flies away, another put his fingers together as if not for making the sign of the cross, but for putting salt over himself. A third one would beat his fingers into his forehead with all his might as if he is driving nails into it. Needless to say that the most widespread mistake is when the hand does not go as far as the shoulder, but is reduced to a place closer to the neck.

Is that a trifle, an unimportant thing, a mere formality? No, by no means. Basil the Great wrote long ago, "Everything in Church is appropriately fine and has its rules." The sign of the Cross is a visible evidence of our faith. In order to find out if a person facing you is an Orthodox Christian, just ask him to make the sign of the Cross. Whether he or she would do it and how they would do it will make everything clear. Let’s quote the Gospel here, "He that is faithful in that which is least is faithful also in much" (Luke 16:10).

So how should we make the sign of the Cross correctly?

We are to put together the first three fingers of the right hand, which symbolizes the Unity of the Holy Inseparable Trinity. The other two fingers should be bent towards the palm signifying the descent of the Son of God to earth from Heaven (two fingers being the image of two natures of Christ). The fingers put together first touch the forehead — to sanctify the mind, then — the belly near the solar plexus — for sanctification of feelings, then to the right and finally to the left shoulder — to sanctify one’s bodily strength. We bow only after the hand is dropped along the body. Why? Because we have just shown the Calvary Cross on ourselves and we bow to it. Incidentally, there is one more widespread mistake: a bow performed simultaneously with the sign of the Cross. We should not do that (break the Cross).

In many old textbooks on the law of God the lower end of the sign of the Cross is mistakenly proposed to be made at the level of the breast. In that case the Cross appears as if it is upside down (the lower part is shorter) and involuntarily it turns into a cross of the Satanists.

Common mistakes when making the sign of the Cross:

Back to the Main Page
Posted by Bible Illustrated at 12:17 AM